Devouring of the Lambs

Aleksis Dorsey is one of the Visionaries in Deathloop. He is the AEON Program's chief financial backer and a self-proclaimed "Alpha Wolf".[1]

A billionaire by the age of 21,[2] Aleksis Dorsey used to run a profiteering pharmaceutical company.[3] While head of the company, he obtained the exclusive rights to an anti-parasitic treatment medication and promptly tripled the price. Although this subsequently resulted in deaths and associated lawsuits, the legal fees were quickly eclipsed by the profits that he made from the drug.

Aleksis joined the AEON Program because he believed that he had finally met his equals in life.[2] Due to his connections, he was responsible for squeezing every last penny out of the AEON Backers to fund their experiment.[4] Aleksis was responsible for recruiting Frank Spicer, who he previously knew from meeting him at a topless pool party at a location known as "The Imperial." He convinced Frank to join the AEON Program in order to "share [his] music with the future of this land."[5]

Aleksis is obsessed with wolf iconography and throws a massive party that he dubs, "Devouring of the Lambs", at Dorsey Manor in the Evening to mark the end of First Day.[6] All guests are required to wear a wolf mask and the main course for the party goers is human flesh, specifically those of certain party goers.

Aleksis loves chocolate beer, dancing to great music and, most of all, himself. He is an egomaniac who wants to be the person that everyone wants to spend time, sleep and party with (except for Harriet)[7].

He views his own ruthless determination as the reason for his success,[2] and has no regard for the sanctity of anyone's life, except his own.

Aleksis carries the Karnesis Slab which allows him to hurl people through the air, his own henchmen included.

He also carries dual LIMP-10 submachine guns with the Vampire perk. He will drop them if he is killed. 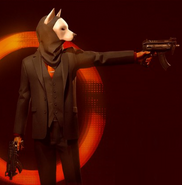 Seen with other Visionaries, far right. 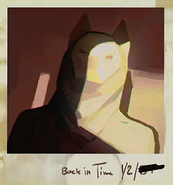 Photograph of Aleksis, dated 1/2, with the year obscured.