The founder of AEON, Egor craves respect, but the pseudoscience of his breakthroughs often leaves his "genius" unnoticed.

Egor Serling is one of the Visionaries and the major antagonists of the Deathloop.

Egor is a self-proclaimed pseudoscientist, psychometry researcher and the initial founder of the AEON Program[1]. He is, by his own accord, the last of the ascetics[2], having abandoned vast wealth and philantropy work for the chance at his 'true' calling with the psychometry[3].

He is contradictory, simultaneously craving both the loud acknoledgement for his scientific pioneering and the isolation of a preeminent genius. When he gets neither, a whole new side of his personality unveils—Egor turns violent[1].

Egor's distinctive appearance consists of thick brown glasses with photochromic lenses, a gray sweater, black suit trousers, black Oxford style shoes, and his distinct red jacket.
His jacket has some pins and patches attached to it at his left side, which references his work on psychometry. His jacket might also be designed to interact with his Aether Slab[4].

Before the loop, Egor's appearance was slighly more put together, evident of his abandoned wealth, as he wore brick red double-breasted coat, along with white suit pants and his face was yet to show evidence of his paranoidal erraticity.

Egor is a paranoiac[5]—as well as insecure about many things but mostly his intelligence[6]. His anxiety towards his own scientific prowess forced him to consider methods to amp up his chances, as he paid Aleksis Dorsey a considerable sum of money to instigate a creation of 'brain enlargement medicine', however to no considerable effect beyond initianing vision impairement and desquamation[7].

His fear of insignificance[6] is a driving force behind his desire to exploit the Loop to make a groundbreaking scientific discovery, as he craves acknoledgment from fellow scientists[8] as well as his ultimate reasoning for starting AEON and moving to Blackreef altogether[9]. Every available method is exploited to highlight Egor's irreplaceable desire to be taken seriously and percieved with respect, be it imposed fear[10][11], shameless self-promotion[12], continuous mention of his merits[9] or fished out invitations[13].

Along with his insatiable craving for acknowledgement, Egor begs to not be perceived altogether: he craves isolation, ascetic living conditions and harsh passion for violently ensuring his solitary confinement[1][11].

This obscene inconsictence proves to successfully ensure only one outcome: neither Egor's peers nor his subordinates think highly of him[8][14][9], and even his supposed friend Aleksis needs extra pressure to invite him over as a guest[13], whilst the usually dispassionate archivist needs to stress his desire to 'be different from the rest' in Egor's Quesstionaire.

Egor has been born to a wealthy Motherland's family, raised in the estate—all of which he consciously chose to leave behind for a chance of advancing in the psychometry[2].

At some point of his life, during the unnamed congress, Egor has crossed paths with Dr. Wenjie Evans, a respected scientist, who will later become the co-founder of the AEON Program, serving as its Architect. It is unclear what kind of a relationship they had prior to becoming colleagues, but Egor is adamant at receiving Wenjie's approval and even praise, however fruitless still[8].

Although the sources are unknown, at some point in his life, Egor has learned of Blakreef and its resident Anomaly, which has been warping time and space, which presented the invaluable opportunity for his research—and through yet unnamed channels, he has learned of an ex-Horizon military officer, contained at the Dargyey Institute. He has tapped into the family funds to organize Colt's discharge and further convinced him to help locate Blackreef[9][15].

Psychometry is a branch of pseudoscience, classfied as a form of extrasensory perception, characterized by the claimed ability to make relevant associations from an object of unknown history by making physical contact with that object[16]. It is nested under the 'natural science' category by the solitary pioneer of the research, Egor Serling[2].

Egor is one of the nine individuals called the Visionaries, having been imbued with the Anomaly's energy[17] prior to the First Day. Thus he is considered the leader of the Eternalists, however they disregard him as such. Being one of the only two scientists among the Visionaries, Egor occupies a considerable part of The Complex, the Array Y location where he has set up a stack of containers, titled Serling Labs.

His purpose on the island is to make a breakthrough in the pseudoscientific psychometry, to achieve which he has involved Wenjie Evans numerous times: she has installed wireless transmitters on his V-22 Listening Devices[8], as well as provided him with a vast amount of Field Nullifiers for when he accidentally applied his Aether Slab on one of his devices[18].

However, Egor doesn't always stay in his Labs, proving to be hard to catch in one place: due to manufacturing defect, every V-22 Listening Device has to be aligned manually to precise measurements, which results in his deaily endeavours across the island, starting with Array P of Zone 2, to Array R of Zone 1, then to Array J in Zone 2 and finish at the Array Y in Zone 3, which is where he can be encountered by the player[10].

Progressing through his Visionary Lead Lost in Transmission reveals that he desires to be invited to Aleksis Dorsey's Devouring of the Lambs' party at Dorsey Manor, however if his experiment proves to be successful, he rejects the hard-won invite in favor of analyzing his breakthrough.

If Colt intervenes with his research at any time of the day except Evening, Egor shows up at the party to drink away his sorrow. There are two ways the party events can go down, and they directly depend on whether Wenjie attends the party as well.

If Wenjie attends the party, due to her own Lead, What Wenjies Want, being completed, Egor can be found on the rooftop, trying his hardest to impress the scientist, but ultimately pissing her off. During the Golden Loop she goes as far as to push him down the roof window, brute forcing him down into the manor.

If Wenjie does not attend, he can be found manipulated into starting a séance by a group of attending Eternalists, the whole event ultimately cooked up to embarass him by turning on the Field Nullifier and dispelling his Aether. He later retrieves to a small balcony, overseeing the inner ground of the Manor, situated behind the Aleksis Dorsey's statue and rarely moves anywhere else until alerted to Colt's presence.

Egor is the Program's Founder: not much is known beyond his position. He is the one who explains the AEON Program to the new coming Eternalists[12].

Considering Egor has left his wealth behind to proceed with moving to Blackreef, it is safe to assume he hasn't participate in funding the program beyond starting it altogether.

I have been invisible MY ENTIRE LIFE! 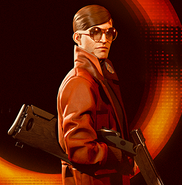 Photograph of Egor, holding a device.

Before loop with other Visionaries, second on the left.

Egor, alert at the Array Y.