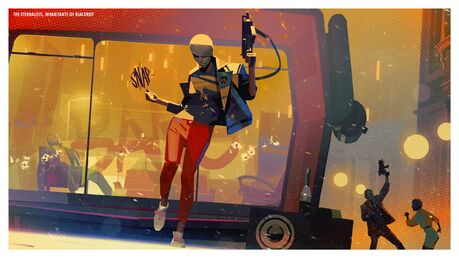 Eternalists are the AI-controlled mob enemies, encountered throughout Deathloop.

Eternalists are the manpower behind the AEON Program: under the leading hands of the Visionaries they have built the Isle of Blackreef from the ground up. Almost. They are the faceless, nameless people that Colt Vahn meets as he traverses through the island, working out its mysteries and secrets. And they all want him dead[1].

Before the First Day[]

Eternalists are made up of Affiliates and Backers, the initial classification for those below the Visionary rank[2].

Affiliates were mostly recruited by Harriet Morse and Frank Spicer, and majorly—from a maximum security prison[3], where they served their time. Affiliates were to bring the manpower to the island[2], building it for AEON's needs as well as repurposing old Operation Horizon's facilities for newer inhabitans.

Backers were recruited by Aleksis Dorsey, the Chief Financial Backer, and consisted of well-off young adults[3], who gladly donated large sums for the needs of the Program[2] under the promise of an eternal life.

However, sometime prior to the First Day, all classifications were abandoned, and every person under the title of a Visionary were made an Eternalist, and forced to wear a mask, concealing their identity and status[2]. Despite that, some prefer to retain the classifications, even with a mask[4].

There were scientists under the command of Wenjie Evans, with recommended degree to be the associate's degree[5], however there is no evidence they belonged to a separate category, most likely falling under the Affiliates classification. There were also Fia Zborowska's subordinates who she brought along as well as Charlie Montague's game development personnel, falling under the same category.

There were several cases of Eternalists vanishing over the course of two years and prior to the First Day[6]—most of whom didn't get with the Program, leading Frank Spicer and Colt Vahn to enact the plan of dealing with the ones who shake the AEON's boat[7], an activity for which they used the Boathouse under Ramblin' Rock Club.

Eternalists walked into the Loop along with the Visionaries, however they have little influence onto the Anomaly—they don't leave a residuum-infused corpse when they die, looping instantly to the next iteration. Despite clear warnings[8], some of the Eternalists decided to start the Loop intoxicated[4].

It is unknown how the entirety of Eternalists behaved right after the Loop was initiated, but at the moment of the game, almost every Eternalist except Pick Rexly experiences 'sundowning'[9], leading them to trace the same path every loop, unless Colt intervenes (as seen with two Eternalists trying to break the wall in Updaam at

or intercepting the snipers at their nest during

True to their purpose, Eternalists gather at the locations where a Visionary is present[10], intending on intercepting Colt in his mission of breaking the Loop. Aside from that, Eternalists can be found in every time and every map, taking up different activities.

Some of the Eternalists are only referenced, not only non-playable but also non-present in the game.

Eternalists are all hostile to Colt, and will enter alert mode when catching a sight of him. They are, however, hospitable towards Julianna and even greet her when she walks among them, e.g. "Happy First Day, Julianna!" and other lines. However, if they notice Julianna killing a Visionary or killing too many of their fellow Eternalists, they also enter the alert mode, now searching for her as well as for Colt. 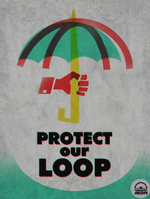 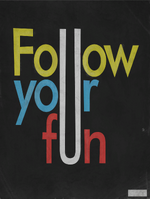 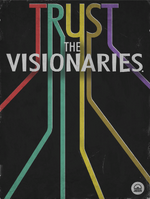 Eternalists are expected to follow the three Tenets, shaping their day around the Visionary they are subordinate to.

As per Harriet's abandonment of classification and masks introduction, every Eternalist has to wear a mask to conceal their identity—this was a mean to equalize the Eternalists between themselves to avoid creating any class-related mistreatment. Strong evidence[11] suggests that some Visionaries do not consider their fellow colleagues to be anything above an Eternalist, however the Visionaries are the only people to not wear a mask (except Pick Rexly), since they assume the highest position in the AEON Program.

Aside from the Tenets, Eternalists are subject to the rules of AEON Coital Center, as per Code of Conduct.

Aside from interactive Eternalists like Betty or Angry Eternalist, there are some Eternalists that Colt can encounter who don't have a name to them:

Eternalists armed with the MG-1 'Pepper Mill' in Fractured ImAge.