Edit
watch 01:36
We're Getting Mutants in the MCU - The Loop
Do you like this video?
Play Sound
For the Note, see Harriet Morse (note).

Harriet Morse believes she has insights into the island's mysteries, but her matronly guidance toward her cult of fanatics just shows how broken Blackreef's moral compass is.

Harriet Morse is one of the Visionaries in Deathloop. She is the Human Resources Manager for the AEON Program.

Like most of the other Visionaries, Harriet was born to a wealthy family who made their fortune in the ammunition business.[1] When she lost her family at a young age, Harriet inherited their company and fortune, and was put into the guardianship of a woman named Elanor. Elanor supported Harriet in her academic pursuits, giving her the resources, time and attention she needed to excel in her endeavours. However, Elanor was also simultaneously siphoning Harriet's wealth from her and gradually stealing ownership of her family's legacy over the course of 14 years.[2] Elanor's betrayal was a formative moment in Harriet's life, and she began viewing other people as ephemeral window dressing in a life where the only constant was oneself.[3]

Harriet was the sole survivor of a horrific plane crash and, in that moment, she found her inner clarity and viewed her emergence from the crash as a rebirth. This led her to found her current belief system - Two Path Divinity.[4] For Harriet, the AEON Program's Loop allows her to realize the pinnacle of Two-Path Divinity - being reborn over and over again with each day in hopes of reaching 'The Great Beyond'. She brings the message to her followers, many of whom were identified during the recruitment process by Frank Spicer as being natural followers of the belief.[5]

Harriet opens the Morning of First Day with a sermon in Hangar 2 of Karl's Bay, after which she removes herself to an unmapped spot on the island, awaiting the next loop.[6][7]

Two paths leads us, intertwined, to the Great Beyond.

Two-Path Divinity was founded by Harriet Morse and its followers are known as 'Seekers'. It was founded on the belief that all suffering can be ended through reaching a place known as 'The Great Beyond'.

Two-Path Divinity is based upon three precepts:

The 'Two Paths' refer to a path of chaos and a path of peace, both intertwining to lead believers to the Great Beyond - a place where all suffering is ended. Within the Loop, Harriet and her followers intend to alternate Days of Chaos and Days of Peace. First Day is designated as a Day of Chaos, where Seekers are to embrace their darkest impulses. The next day would have been designated a Day of Peace, during which Seekers would reflect upon what had happened the day before.[8] The constant cycle of rebirth given by the timeloop was what Harriet considered to be the greatest gift that she could give to her followers.

Harriet is mistrustful of others and keeps a list of dirty secrets on her fellow Visionaries, presumably to be used if any of them wrong her. Her priority on Blackreef is to reach self-actualization and the Great Beyond through Two-Path Divinity.

She is one of the few Visionaries who takes the Loop Preservation Protocol seriously.[6] She has generally little regard for the others save for Fia Zborowska, who she believes may be the only one on Blackreef besides herself who truly grasps the truth of Two-Path Divinity and the Great Beyond.[7] She believes that the temporal anomaly that surrounds Blackreef cannot be explained by science but only by something more supernatural.[9]

With most of the other Visionaries, far left. 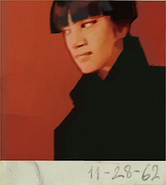 Photograph of Morse with a camera.

Harriet in Hangar 2, after the sermon.

Harriet in Hangar 2, before the sermon.