Any (other Visionary present)

Julianna wants nothing more than to keep this eternal game of cat-and-mouse going. She's the constant voice in your ear...and the ever-present bullet in your back.

Julianna Blake is one of the Visionaries and the main antagonist in Deathloop. Her alias is Jules.

Julianna is the archivist and the new head of security of the AEON Program. She appears at the start of the game, seemingly caught in an endless timeloop within Blackreef along with Colt Vahn, the game's protagonist.

However, unlike the rest of the inhabitants, she seems to have avoided the amnesiac effect of the the anomaly. Being the only remembering Visionary, Julianna believes that her life's purpose, as well as duty, is to 'protect the cycle'—and for that, she must eliminate the threat to the loop in the face of Colt[1].

Julianna wears many faces, thanks to her unique Slab—the Masquerade[2].
She is relatively tall, lean and athletic in a way that allows her to be agile to successfully hunt down Colt Vahn. Julianna has voluminous curly dark brown hair, which she usually ties with a mustard-colored natural silk satin headband, and she likes to wear a pair of black and white painted metal round earrings.

Julianna displays a rather unique personality: "one moment she’s tenderly holding your hand, and the next, she’s plunging a machete through your spine"[4]. She is simultaneously caring and mocking, trusting and betraying, but she never fails to deliver a snarky commentary to Colt, whom she constantly tries to convince to not break the Loop—and any method to accomplish that is plausible.

Julianna never shies away from excessive violence, and she outright states to be enjoying the hunt and the game between her and the player (Colt), and her motives are rather self-explanatory. She strongly believes in the Loop's potential and exercises it to her own amusement, with little regard to the rest of the Visionaries[5] or Eternalists[6], unless the Loop is threatened.

Julianna is known to be able to hold her liquor and having an iron spine[7], and she is an exemplar bookworm, having her own library at her mansion, as well as filling the entirety of available surfaces with magazines and book yet to be read[8].

She appears to be detached from the events unfolding as the player progresses through the leads[9], however she is restless and cannot wait until Colt comes to her to talk face to face. She is pretty confident in her own chances, as she doesn't shy away from the direct conversation and even a duel when Colt learns what she deems enough to evaluate the Loop's potential.

Julianna has her priorities set straight and follows through with them efficiently, although she is not one to refuse herself some fun: she outright claims to have killed other Visionaries multiple times[6] and further proves it by commenting "Haven't done that in a while" when killing Harriet Morse during her own game mode.

She is very knowledgeable, keeping many details of her and Colt's lives, as well as other Visionaries' in her mind to carefully lay out her game rules to Colt, as he progresses through the discoveries[6].

My island. My rules. My Colt.

Not much is known about Julianna prior to her admission into AEON as it's archivist—she has lived with her mother, Lila Blake[10] before the latter's untimely death and has been educated as a historian[8].

Julianna Blake is the only daughter to Lila Blake and Colt Vahn[11], having been conceived on the island prior to the latter's disappearance in the Anomaly in 1938[12].

She is the only person on the island to have excelled at the numerous amount of tests, created by Egor Serling and Wenjie Evans as a part of her admission[6], and she is a certified bookworm, having hauled her abundant library along with her to Blackreef[8][7].

Julianna is enthralled to live infinitely for the sole purpose of being able to read as many books as she deem fit, and her passion is yet to hinder[8][6].

Julianna is one of the individuals called the Visionaries, having been imbued with the Anomaly's energy[13], prior to the First Day. Thus, she is considered one of the leaders by the Eternalists, and they reverently regard her as such[14].

She occupies Berezin's Manor as her living space and AEON Archival Office as her workplace, however she can be found in neither, as she situates herself in a location out of Colt's reach for safety purposes[15]. Unlike the rest of the Visionaries, she can be encountered frequently and on different maps during the gameplay, as invading Julianna.

Progressing through her Visionary Lead Radio Silence it is revealed, that she has situated herself in the Stabilizer Core, which is only accessible by flying the Rakyetoplan towards the Antenna, however to accomplish that, all seven other Visionaries have to be dead[11].

During the final confrontation with Colt, it is revealed that she has been murdered continuously and increasingly violently in his attempt to break the cycle, to which she started fighting back and one day learned to like the ensuing cat-mouse hunt. While initially being the hunted one, Julianna has later grown to be the hunter, having avoided sundowning[16] by inventing a special memory storage techinque she named "compressing" and being able to retain memories across loop iterations.

Julianna mentions creating "compressing" around 139.5 years into the loop[6], meaning she has been retaining her memories ever since, however it is unclear how long she has been forgetful like the rest of the island.

Julianna is the Program's Archivist[17]: her responsibilities include dispassionately documenting everything that happens to the Anomaly and the Loop[2].

Due to certain events, she also has to adopt a new position — the Head of Security, previously occupied by Colt Vahn.

Julianna may enter a district to hunt the player (Colt Vahn) down, if there is any other Visionary present at the moment. When she invades a game, the tunnel exits get locked, as she uses a special device to activate the radio antenna, successfully disabling the password keypads.

Colt can take Julianna on — and replenish his Reprise by defeating her, or hack the radio antenna and make haste from the level.

Killing the invading Julianna will not cross her off the list of the eight Visionaries needed to be killed for breaking the Loop, as she uses her Visitor[18] self to hunt Colt down, which means she can successfully invade any map numerous times during the same loop (only if the player visits the Visionary-present locations). However, the only map with Visionaries she cannot invade is the Fristad Rock's Afternoon map, as it is manually locked for plot purposes.

The player may also choose to play as Julianna once the prologue is completed. In this mode the player can randomly invade other player's timelines or choose to invade a friend's timeline.

Key art of Colt and Julianna. 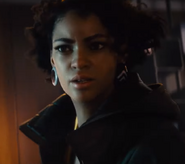 A frame from the game's reveal cinematic trailer. 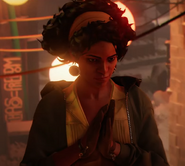 Julianna in the first cut-scene.