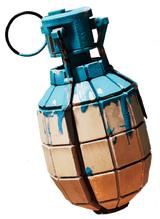 The Strelak Sapper Charge is one of the weapons found in Deathloop.

The Strelak Sapper Charge is a versatile explosive with three configurations: Grenade, Proximity Charge, and Trip Mine. These modes can be cycled at will and each have their situational advantages.

Grenades can be thrown or cooked as timed explosives. Trip Mines and Proximity Charges can be thrown or placed on any surface, and can be picked up by Colt at any time (before detonation). Enemy trip mines can not be picked up by Colt, only disarmed. Juliana on the other hand can repurpose any trip mines placed in the area to replenish her stock of Strelak Sapper Charges.

The Strelak Charges in Colt's Bunker